Based around a “CAT” acronym, these guidelines aim to provide a memorable and easy to implement set of instructions for people to follow during all Human-Cat Interactions, with the exception of situations requiring specific handling for formal veterinary procedures and so forth.

The “C” represented providing the cat with Choice and Control during any human-cat interactions, enabling them to both “opt in” and “opt out.”
The “A” encourages people to pay attention to the cats’ behavioural and postural responses during interactions, and to moderate their behaviour accordingly.
The “T” encourages people to restrict their touching of cats primarily to the cats’ temporal regions. 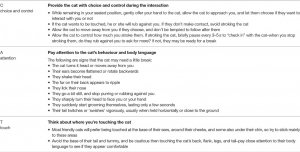 Choice is a primary reinforcer for cats, with primary reinforces being things that they desire without having to learn anything about them – for instance feeling safe, having access to key resources such as water, food and a place to sleep. When our pets are not given choice, or the ability to control outcomes, they may have elevated stress levels which in turn may manifest in a number of other health issues such as a poor cardiovascular system, increased inflammation, reduced immune function and impaired learning abilities (Adelman, B., 2019).

Cats have their own way of saying ‘stop, I’ve had enough’. Sometimes they may just walk away; other times they may give a very subtle signal which is then up to us to identify and listen to.

Some of the signs cats give us to say ‘please stop touching me, I’ve had enough’ include:

• Excessive vocalisations: “angry meows”, hissing, growling, snarling)
• Ear positions: flat, sideways or back of head
• Tail: it might be flicking or lashing
• Skin: their skin might be twitching
• Pupils: dilated or slit
• Claws: out and ready to attack
• Whiskers: pushed forward
• Body: stiff legs or shoulders
• Paws: raised and ready to strike

Where we don’t listen to or respect the signals our cats give us to back away we are giving them no option but to escalate – and this is often with a swat or bite. Cats would like to be able to decide when they are going to be touched, where they will be touched and for how long. When we respect their needs and wishes our relationship with them changes. We learn to identify and honour the subtle signals they give us, and they learn that we can be trusted not to hurt them. And as they learn this (through time and patience) they may even solicit increased contact with us as they know that we will respect their personal space and boundaries. Aggression is typically considered to be a problem behaviour, especially when it is directed towards humans; with its presence negatively impacting the owner-cat relationship and the cats health and wellbeing – both emotional and physical – and may contribute to poor welfare outcomes and eventual rehoming.

Using the CAT guidelines as ‘best practice’ may help cats behave less aggressively during contact, but also present with fewer negative behaviours associated with conflict overall; it may also result in an increase in positive human-directed affiliative behaviours such as attention seeking, rubbing flanks on legs, slow blinks, etc and helps promote wellbeing and relationships which are built out of mutual understanding and trust.

References:
Adelman, B., (2019), ‘Choice: what it means for cats’ Available from: https://www.fearfreehappyhomes.com/choice-what-it-means-for-cats/ 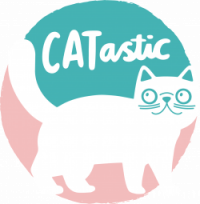 Can the place your cat sleeps or eats affect its behaviour?